Menu
Dear Students All the Best for your Semester Examination - Principal

UG Degree courses under the faculty of Arts & Science : B.A Tamil Literature and English Literature, B.Sc., Mathematics, Physics, Chemistry with parallel media were introduced at the very beginning. In 1981, B.Com., course was started. In 1985, two blocks of buildings with 4 class rooms in each were built by the Government . The P.W.D built the compound wall and provided drinking water facility. In 1995, two more class rooms were built. In 1997, M.Sc., Mathematics (Applicable Mathematics), B.Sc., (Computer Science) and B.Sc., (Microbiology) were started. In the following year B.A., (History) was started.

In 1999,B.Sc. Chemistry, English medium course was converted into Industrial Chemistry. In the same year two more blocks of 6&9 class rooms respectively were built and a Hostel to accommodate 250 students was also given by the Government in the college campus.

Considering the students’ need M.Com., was started as a Self-Financing course in 2003. In 2006, the same has been changed to a regular course by the Government of TamilNadu. In 2010, BCA was started and in 2010 M.Sc. Chemistry, M.Sc. Computer Science and M.A. Tamil Literature were started. In 2012, M.A. English Literature, B.Sc. Statistics, B.A.Economics and B.Sc. Botany were started. Now our college is fully equipped with Language Lab, full equipped CLP Lab with full LCD facilities and advanced computers. The college has been providing higher education to students hailing from Salem and surrounding suburban area for the past 25 years. Currently about 3500 students are studying in the college with a faculty strength of 150.This college is developing along multiple dimensions and many students secure university ranks every year. Our college is, to the thousands of girls from Salem city and neighbouring areas, the greatest milestone, crossing which they embark on their journey of education and empowerment. 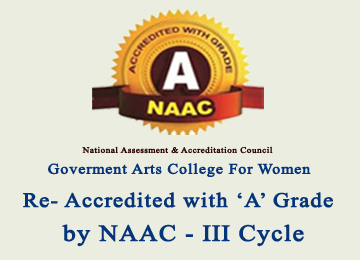